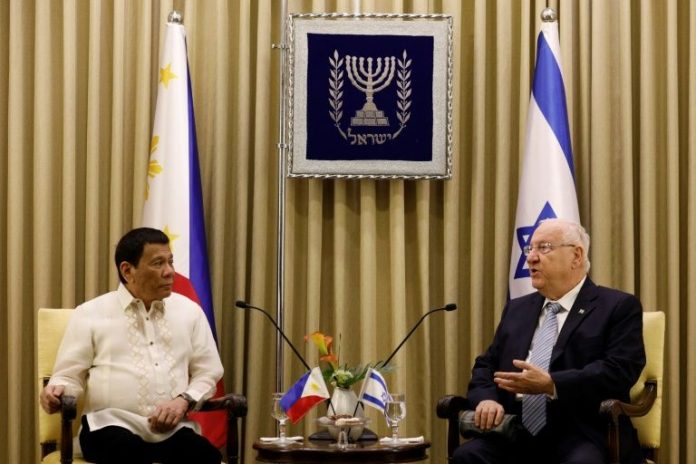 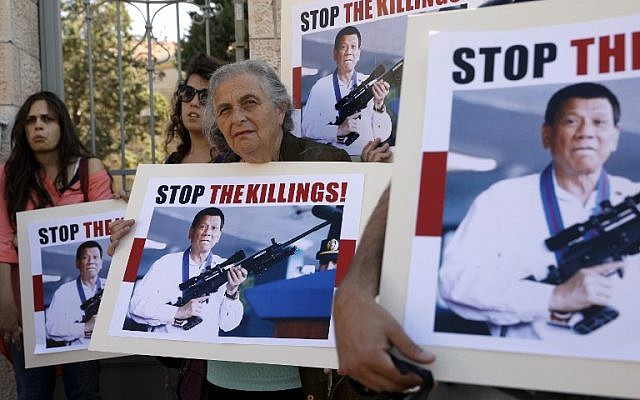 Israelis protest against Philippine President Rodrigo Duterte’s visit to Israel as they stand outside the presidential compound in Jerusalem on September 4, 2018, during Duerte’s meeting with his Israeli counterpart. //AFP

Jerusalem – Israeli President Reuven Rivlin gave a brief lecture on Hitler to Rodrigo Duterte on Tuesday after the Philippine leader’s 2016 remarks comparing himself to the Nazi dictator who carried out the Holocaust.

“Hitler was actually representing the devil himself,” Rivlin said when the two men met at his Jerusalem office. “He was the devil on earth.”

Rivlin went on to say that Duterte’s visit to Israel’s Yad Vashem Holocaust memorial on Monday must have illustrated to him the sensitivity surrounding any reference to Adolf Hitler.

“Probably you have realised yesterday the feelings when you have visited the museum of Yad Vashem in Jerusalem, to really feel the atmosphere, to feel the feelings of all the people that were part of this disaster,” said Rivlin, whose position is mainly ceremonial.

Duterte appeared to be listening attentively during Rivlin’s brief comments. He later spoke about trade and cooperation with Israel.

The controversial Philippine president spoke of Hitler in 2016 when talking about his violent drug crackdown that has killed thousands.

“Hitler massacred three million Jews. Now there are three million drug addicts (in the Philippines). I’d be happy to slaughter them,” Duterte said then.

Duterte later apologised and said the comments were aimed at critics who had likened him to the Nazi leader.

According to Rivlin’s office, Duterte also told Rivlin his preferred source of military equipment was from Israel.

A few dozen people opposed to arms sales to the Philippines protested outside the presidential compound in Jerusalem during the meeting.

Further arms deals were expected to be part of Duterte’s discussions in Israel.

Duterte met Prime Minister Benjamin Netanyahu on Monday. On Wednesday, he will inaugurate a memorial near Tel Aviv commemorating the Philippines’ acceptance of 1,300 Jews fleeing the Holocaust.