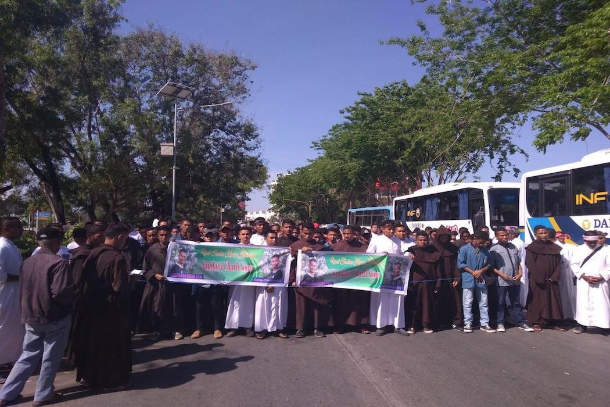 Catholics in East Nusa Tenggara province stage a rally on Sept. 7 to call for a thorough investigation into the death of an ex-seminarian. (Photo supplied)

Dozens of priests, nuns, seminarians and human rights activists in Indonesia’s East Nusa Tenggara province have called on police to investigate what they said was the mysterious death of an ex-seminarian more than a month ago.

They marched on police headquarters in Kupang, the provincial capital, on Sept. 7 to demand police explain the cause of death of Carolino Agustino Sowo, 25, a former member of the Discalced Carmelite Order and student at Widya Mandira Catholic University in Kupang.

Fishermen found Sowo dead on a Kupang beach on July 24. His motorbike was found nearby.

Local news portal HalamanSembilan.com later reported that an initial autopsy at a police hospital recorded his skull was fractured and he had suffered facial injuries.

Rally coordinator Father Hironimus Pakaenoni, who is also head of Widia Mandira University’s philosophy faculty accused police of dragging their feet over what happened to the Catholic youth.

“The police have said nothing. We want answers and quick,” he said, adding that Sowo’s relatives and activists believe he was murdered.

“Based on the evidence we have gathered, we are very confident that he was killed and the perpetrators are professionally trained people,” he said without divulging what the evidence was. “We have submitted it to the police.”

He said Sowo was a humble person and active within the local church.

However, Petrus Selestinus, a Catholic lawyer said police in the province are starting to get a reputation for failing to solve cases.

He said several cases remain unresolved, including the shooting of a young man allegedly by a member of the security forces in March in Manggarai district, and the killing of a farmer in West Sumba district by police during a land conflict.