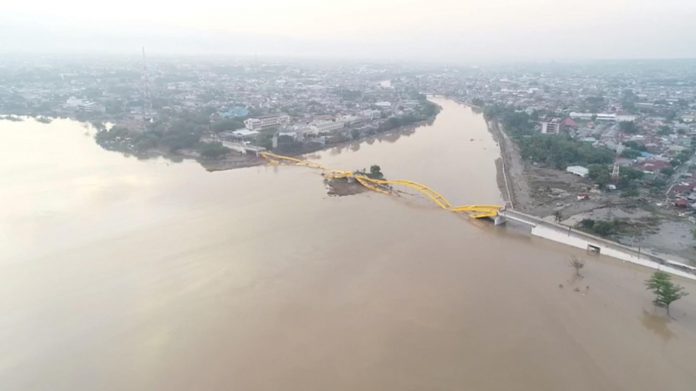 UPDATE: 6.45 a.m. EDT – Bodies of two missing paragliding athletes were found from the ruins of Hotel Roa Roa in the Maesa area, Palu, on Monday. According to local television reports, around 3,000 residents have flocked to the Palu airport trying to flee.

The condition in the Petobo neighborhood of Palu city is bad due to the phenomenon called liquefaction and “there are still hundreds of victims buried in mud” in the area, Sutopo Purwo Nugroho, spokesperson for the National Agency for Disaster Countermeasure, said.

French Ministry of Foreign Affairs said the 3 missing French nationals have been found alive and will be evacuated soon.

UPDATE: 5.20 a.m. EDT – Volunteers have started to fill a mass grave in the hills above the city of Palu with the dead. According to reports, a total of 600 people were hospitalized and more than 48,000 displaced due to the Indonesia quake-tsunami. Palu airport will be re-opened for a single flight a day to another area of Sulawesi island, reports said.

UPDATE: 3.10 a.m. EDT – The official death toll in the Indonesia quake-tsunami has increased to 844. In a press conference, Sutopo Purwo Nugroho, spokesperson for the National Agency for Disaster Countermeasure (BNPB) said though heavy equipment have arrived, “a large amount is needed to evacuate victims hit by debris and buried in mud.” He also stressed that the disaster agency has “limited data, information and access” to affected areas. A total of 144 foreign nationals were in Palu and Donggala regions during the disaster, The Guardian reported.

The Indonesian government called for international help Monday to deal with the aftermath of the earthquakes and tsunami that hit the island region of Sulawesi on Friday, killing over 800 people.

The government’s head of investment Tom Lembong tweeted that President Joko Widodo “authorised us to accept international help for urgent disaster response” as the government struggles to come to terms with the scale of the disaster. According to reports, several aid agencies and NGOs have lined up to provide life-saving assistance and countries like Thailand and Australia have already offered help.

According to latest reports, multiple mass prison breaks have been reported in the quake-tsunami zone. Directorate General of Correctional Affairs at Law and Human Rights Ministry Puguh Budi Utami said that 1,425 prisoners are now missing from jails post the structural damages done to prisons. There are only 66 inmates left in Palu prison which previously had 581 inmates, and only 53 of 463 inmates remained in custody at Palu detention center.

Guardian reported that lack of fuel is the biggest issue hindering the rescue efforts and it will take an estimated three days to restore electricity to the city of Palu.

“The supply of fuel, (given) current circumstances, is very limited. The lack of fuel has caused mobile electricity generator units, vehicles and water pumps to remain idle,” said Sutopo Purwo Nugroho, spokesperson for the National Agency for Disaster Countermeasure (BNPB).

The death toll which currently stands at 832, is expected to rise sharply with several people still trapped in the rubble of several hotels and a mall in Palu. The city was hit by waves as high as 20 feet following the 7.5 magnitude earthquake. An entire community of up to 2,000 people is feared killed after mudslides landslides engulfed villages in the surrounding villages of Palu.

Authorities are particularly worries about Donggala, a region close to the epicenter of the quake, which has a population of around 300,000. BNPB warned the death toll could reach far higher once relief workers reach towns like Donggala.

“We haven’t received reports from the three other areas. Communication is still down, power is still out. We don’t know for sure what is the impact,” Nugroho said, South China Morning Post reported.

Nugroho added that five foreigners — three French, one South Korean and one Malaysian — were among the missing.

A mass burial is also being prepared in Palu to bury the dead as soon as they are identified in order to prevent the spread of diseases.

“This must be done as soon as possible for health and religious reasons,” said BNPB chief Willem Rampangilei, The Washington Post reported.

Footages showed families fleeing their homes as the earthquake caused “liquification”, making buildings topple. “There are estimated to be many victims in this area. Evacuation is difficult because many collapsed houses are buried in soil,” Nugroho said.

The damage after an earthquake is seen in Palu, Central Sulawesi Province, Indonesia, Sept. 29, 2018.