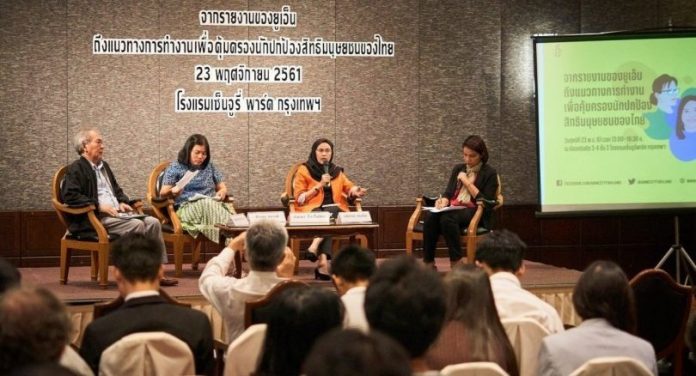 The government has been urged to help protect human rights advocates, particularly women, as a growing number have been prosecuted in recent years, an Amnesty International seminar heard on Friday.

The discussion was held to mark 20 years of Universal Declaration on Human Rights Defenders [HRDs] on December 9.

Angkhana Neelapaijit, a National Human Rights Commissioner (NHRC), said that in 2016, during the Universal Periodic Review (UPR), Thailand received 10 recommendations from other state parties regarding HRDs. At the time, Thailand pledged to take action and investigate the alleged enforced disappearance of HRDs and introduce measures to protect them from harassment.

“Until now, no concrete measures have been meted out. Worse, in the past three or four years, a growing number of women HRDs have been taken to court. Some have almost 10 cases,” she said.

Apart from being sued by private companies, many HRDs have been slapped with legal actions from authorities, she added.

“All these constitute an attempt to use judicial process to harass and stifle public participation, preventing them from exercising their freedom of expression and opinion,” she said.

Angkhana proposes that the laws be changed to allow courts to use their discretion to prevent the indictment of cases that do not serve public interest or cases filed simply to harass or increase the burden on HRDs.

She said the state should come up with measures to prevent any online and sexual harassment and should make an effort to resolve the cases and bring the perpetrators to justice.

Narissalawan Kaewnopparat, who has campaigned to demand justice for her uncle, said she has become an alleged offender simply because she has come out to demand her rights and has discovered many irregularities in the justice system.

Her uncle, Private Wichien Phueksom, died while being tortured by his trainer in a military camp in 2011.

“From the outset, I was told I would fight in vain. But I am determine to fight until my last breath and believe I am able to fight based on proper information and evidence,” she said at the seminar.

Rojana Kongsaen, from the Loey anti-mining network, said that as a result of the struggle to demand the right to manage their own resources, members of her community have been taken to court for violating the Public Assembly Act and the Computer Crime Act in more than a dozen cases.

They also face intimidation and are threatened, she added. Their dogs have been poisoned to death and they have been under constant surveillance.

“They use the law to silence us. We did not kill anyone. We simply work to protect our natural resources. We want the authorities to drop all charges against us,” she said.

Saengchai Rattanaseriwong, a veteran lawyer, said that a Strategic Lawsuit Against Public Participation (SLAPP), is very common now and is used by both state and private sectors behind large-scale development projects who run into opposition from the local community.

He proposes that the Criminal Procedure Code be amended to allow courts to have a preliminary review of the merit of the case before any indictment and witness examination.

“I am not saying that all demonstrations are lawful. If there is any infringement, it then deserves punishment. But the laws should not be abused to serve opportunistic purposes,” he added.