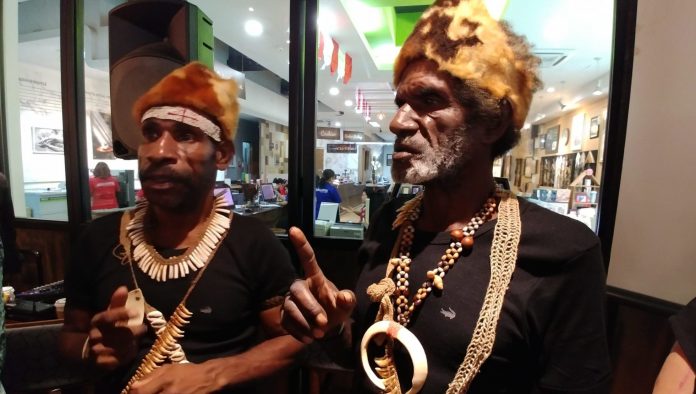 JAKARTA — Indigenous rights activists in Indonesia have expressed concern that the government is stalling the passage of a long-awaited bill on indigenous rights by tangling the legislative process in red tape.

The government said in July that it had agreed with members of the House of Representatives to start discussions on the bill on Aug. 16. But the legislative docket seen by Mongabay shows the start of those discussions has been pushed back to Sept. 27.

Still, the government says it expects the discussions to conclude by January next year, ahead of the bill’s passage into law.

The bill is meant to be the follow-up to a landmark constitutional ruling in 2013 that rescinded state control over indigenous lands and gave it back to Indonesia’s indigenous peoples. Since then, various laws and regulations have been issued that touch on the issue of indigenous rights to some degree, but the central bill that would tie them all together remains locked in legislative limbo.

The government proposed the initial start date for discussions on Aug. 16 with the caveat that a so-called problem inventory — a list of items that various ministries felt still needed to be ironed out — had to be compiled first.

But it still hasn’t submitted the list to the House, says Luthfi Andi Mutty, the lawmaker behind the bill. 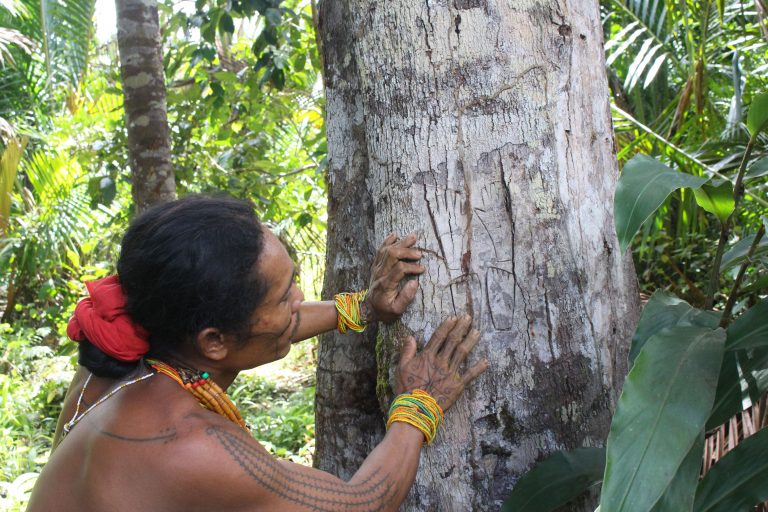 Indigenous Indonesians of Mentawai district depend their lives on the resourceful forests. The passing of the indigenous rights bill could help protect indigenous peoples across Indonesia. Image by Vinolia Ahmad/Mongabay-Indonesia.

Muhammad Arman, from the Indigenous Peoples Alliance of the Archipelago (AMAN), the main advocacy group for indigenous communities in Indonesia, said he had tried to obtain the list from the government, but to no avail.

“We’ve asked the government and they said the list was with the Ministry of Law and Human Rights,” Arman, who heads AMAN’s policy advocacy, legal and human rights department, told a press conference in Jakarta recently. “That’s been the answer for the past four months. And when we’ve asked the ministry, no one answered.”

The start of House deliberations on the indigenous rights bill is contingent on having the problem inventory ready. That, says Arman, leaves the ball squarely in the government’s court.

“The problem at the moment now lies with the government, because even now the still list hasn’t been submitted,” Arman said. “We don’t know why. But we suspect it’s an attempt to ignore the rights of indigenous peoples … the government has deliberately stalled the process.”

The Home Affairs Ministry, which is representing the government in discussion on the bill with the House, has already drawn up its own problem inventory, says Aferi S. Fudail, the ministry’s director for village administration.

But the Office of the State Secretary, which reviews passed bills ahead of the president signing them, has ordered the Home Affairs Ministry to revise its list with input from Energy and Mineral Resources Ministry and the Finance Ministry.

“This process is important because the problem of indigenous peoples isn’t a problem for one ministry only, but it is a problem that all parties have to manage,” Aferi said.

He said the government in particular needed input from the Finance Ministry regarding the allocation of funds from the state budget for indigenous peoples’ empowerment. The funding issue is a key point of contention, and has been cited by the Home Affairs Ministry to argue for shelving the bill entirely.

A letter from the ministry, dated April 11, argues, among other points, that the bill is not needed, citing 16 other laws and regulations that address indigenous issues. It also said the bill would create other problems down the road, including putting unnecessary pressure on the state budget.

For decades, indigenous groups in Indonesia have had their land rights denied by the government in favor of large plantation and mining companies. The government is obligated to relinquish control over state forest areas that fall within indigenous lands, per the 2013 Constitutional Court ruling. But to date, the government has recognized just 18 communities’ rights to their ancestral forests, covering a combined area of 164 square kilometers (63 square miles).

This is far short of the 19,000 square kilometers (7,340 square miles) of land, home to 607 indigenous communities, that AMAN calculates must be rezoned as ancestral forests.

Activists blame red tape for the glacial pace of progress, noting that only local governments can grant recognition of customary forests to indigenous communities through local bylaws. For a local administration to issue such a bylaw, it has to ensure that the indigenous people have been living in the area for a long time and that the customary land truly exists, among other conditions.

Activists say they hope the national bill, once passed, can address these bureaucratic hurdles currently hindering the recognition of customary land rights.

But until that happens, indigenous groups will continue to be at a disadvantage when fighting for their land rights against companies, according to AMAN’s Arman. He said government data showed clearly that land conflicts arising from a lack of legal recognition of indigenous communities and their lands were rampant across the country.

At least 127 indigenous groups in 10 provinces are victims of criminalization from unresolved land disputes, AMAN data indicate, as their lands are taken over without their free and informed consent.

“And these conflicts have resulted in the imprisonment of 262 people,” Arman said. “Some of them are still serving time in prison, while others have gotten out of prison.”

There are also 1.2 million indigenous people whose lands fall within designated conservation areas and who are thus at risk of being resettled by the government, Arman added. He said the continued failure to pass the indigenous rights bill into law would lead to this very scenario; a 2017 presidential regulation clearly states that resettlement is the only way to resolve land tenure problems inside conservation areas. 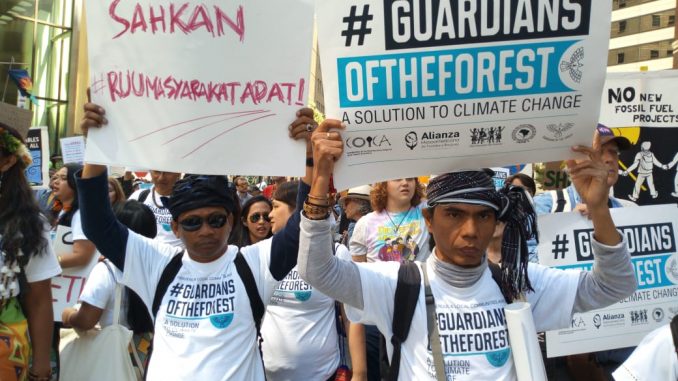 Representatives of AMAN participate in a rally along with other indigenous groups ahead of the Global Climate Action Summit in San Francisco. Image by AMAN.

‘Guardians of the Forest’

Half a world away, in San Francisco, representatives of indigenous groups from Indonesia joined a protest march against climate change with their peers from the Amazon, Mesoamerica and Brazil. Together, these indigenous groups formed a coalition called the Guardians of the Forest.

The march took place on Sept. 8, days before world leaders, researchers and activists arrived in the city for the U.N.-organized Global Climate Action Summit. During the march, the indigenous communities demanded that they be recognized as a part of the solution to climate change.

Sardi Razak, who heads the AMAN chapter in Indonesia’s South Sulawesi province and took part in the march, said indigenous peoples had inherited the knowledge needed to protect the climate. In the case of Indonesia, he said in a press release, the passage of the indigenous rights bill therefore would give the government an invaluable ally in the fight against climate change.

A new study released on the eve of the summit shows the crucial role that indigenous peoples play in managing the planet’s climate. The study, “A Global Baseline of Carbon Storage in Collective Lands,” led by Rights and Resources International (RRI), found that indigenous peoples manage nearly 300 billion metric tons of carbon stored above and below ground on their lands.

That sequestered carbon, the study found, is equal to 33 years’ worth of worldwide emissions, given a 2017 baseline.

The authors note that deforestation rates are significantly lower on native-occupied lands, but that governments often fail to recognize indigenous peoples’ legal claims to their land, thus jeopardizing their ability to manage it.

“Evidence from the last decade shows that developing-country governments and the broader international community are not moving fast enough to recognize and strengthen the rights of forest peoples,” Alain Frechette, an author of the carbon analysis and RRI’s director of strategic analysis and global engagement, said in a statement.

Failure to recognize indigenous peoples’ land rights could open up these lands to unbridled deforestation and release the sequestered carbon into the atmosphere, undermining the global pledge to reduce carbon emissions under the 2015 Paris Agreement.

“At least one-third of carbon managed by communities in tropical and subtropical countries lies in forests where the primary stewards lack legal titles, putting them, their forests and the carbon they store at great risk,” Frechette said.

Banner image: Members of the Kombai indigenous community in Boven Digoel district, Papua province, Indonesia, during a media briefing in Jakarta. Indigenous communities like Kombai are fighting to get their rights recognized across Indonesia. Image by Hans Nicholas Jong/Mongabay.