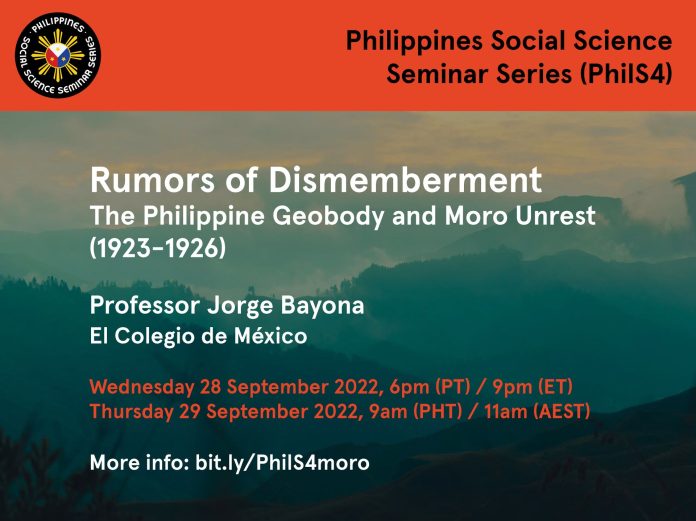 The Sydney Southeast Asia Centre will organize a lecture featuring Jorge Bayona (El Colegio de Mexico) regarding religious and political discord in Mindanao in the 1920s.

The governor-generalship of Leonard Wood represented a challenge to the Philippine élite not only due to his policies of rolling back Filipinization, but also inasmuch as it represented a threat to the Philippine geobody that they aspired to post-independence. With most of Mindanao only recently incorporated into the territory governed from Manila, the cleavage between the Christian and Muslim communities continued to be at the forefront of the minds of the nationalist élite and Leonard Wood. Rumors quickly swirled around what Wood’s policies in this respect would be and how he might try to take advantage of it, and the ways Moro unrest reemerged and was dealt with by the military forces answering to the governor-general led to suspicion by the Filipino élite.

This context of violence reveals the complex ways in which the Christian Filipino élite continued to other Muslim Filipinos while still trying to build a united front against the retentionism represented by Leonard Wood. Furthermore, it lays the groundwork for how the appearance of the Bacon Bill of 1926, separating Sulu, Mindanao, and Palawan from the Philippines was understood and interpreted by Filipinos in Manila.